Announcing the third mural in our Paint and Poetry series 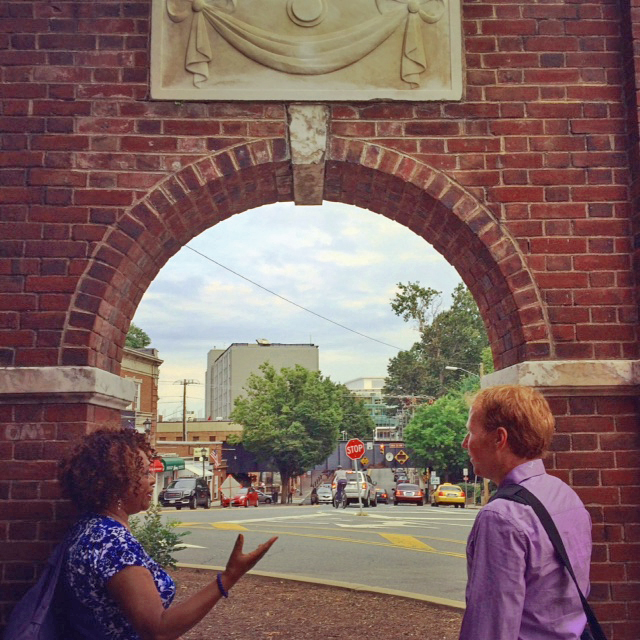 The third mural in the Paint and Poetry series is located on the west and south-facing facades of the new Graduate hotel, formally known as The Red Roof Inn.  The Charlottesville Mural Project and  are fortunate to be working with two world-class artists: poet Rita Dove, and muralist David Guinn.

Rita Dove served as Poet Laureate of the United States and Consultant to the Library of Congress from 1993 to 1995 and as Poet Laureate of the Commonwealth of Virginia from 2004 to 2006. She has received numerous literary and academic honors, among them the 1987 Pulitzer Prize in Poetry and, more recently, the 2003 Emily Couric Leadership Award, the 2001 Duke Ellington Lifetime Achievement Award, the 1997 Sara Lee Frontrunner Award, the 1997 Barnes & Noble Writers for Writers Award, the 1996 Heinz Award in the Arts and Humanities and the 1996 National Humanities Medal from President Clinton. In 2006 she received the Common Wealth Award of Distinguished Service, in 2007 she became a Chubb Fellow at Yale University, in 2008 she was honored with the Library of Virginia’s Lifetime Achievement Award, and in 2009 she received the Fulbright Lifetime Achievement Medal and the Premio Capri. President Barack Obama presented her with the 2011 National Medal of Arts, which made her the only poet with both the National Humanities Medal and the National Medal of Arts to her credit.  A member of the American Philosophical Society, the American Academy of Arts and Sciences, and the American Academy of Arts and Letters, Rita Dove holds the chair of Commonwealth Professor of English at the University of Virginia in Charlottesville, where she lives with her husband, the writer Fred Viebahn. They have a grown daughter, Aviva Dove-Viebahn.

David Guinn is an artist based in Philadelphia PA. A graduate of Columbia University in New York City, he was originally trained as an architect. Since 1998 David has painted over 35 murals throughout Philadelphia and other cities worldwide including Amman Jordan, Montreal, Quebec, New York, Washington DC, and Chicago. His work has been noted in books, newspapers, magazines, on television, and radio, including, the New York Times, Wall Street Journal, Huffington Post, Spin Magazine, La Presse, Montréal, and WHYY TV Philadelphia. His smaller scale paintings have been shown in galleries and museums including The Fabric Workshop and Museum (Philadelphia PA), and Woodmere Art Museum (Philadelphia PA), The Galleries at Moore College of Art and Design, and The Rosenwald-wolf Gallery at University of the Arts (Philadelphia PA). He is the recipient of numerous awards and grants including an being a finalist for the prestigious Knight Arts Challenge 2013, a finalist for the Pew Foundation fellowship in the Arts 2012, and being awarded an Independence Foundation Fellowship and a Mid-Atlantic Arts Foundation Fellowship in the Arts. In 2012, David founded Freewall, an outdoor space at 1214 Sansom Street, Philadelphia, dedicated to promoting innovative mural art.

About once per term, the CMP is approached by a UVa student inquiring about painting a mural on the walls of the railroad abutments, located on the corner of University Avenue and 14th street.  Due to restrictions from CSX and Buckingham Branch train companies, we always inform the students that it’s not possible to paint those walls.  But throughout this conversation with UVa students, it’s clear that the UVa body is interested in public art, and especially about improving the visual landscape of The Corner and other areas surrounding grounds.  This mural is a wonderful opportunity to bring public art to the everyday lives of UVa students and Charlottesville residents.  The mural enlivens The Corner, and adds to the vibrancy of student life in the restaurants, shops, and hotels.

“I think it’s beautiful and the building is already anachronistic to the university.  It has a really good sentiment with the university, so I find it completely appropriate in that sense.” – Carl Schwarz, BAR member and architect

Because of the mural’s close proximity to UVa grounds, and Dove’s role as a UVa English Professor, we sought immediate support from UVa Arts.  We’re excited that Jody Kielbasa, Vice Provost for the Arts at UVa, was very enthusiastic about the project and offered administrative and financial support (please see attached letter of support from UVa Arts).

We will be working closely with UVa, organizing artist lectures by Guinn in various art classes throughout the department.  Furthermore, we look forward to a public dedication event, where Rita Dove will perform a reading and UVa students and Charlottesville citizens will be able to meet the artists and learn more about the design.

The mural will incorporate and be informed by one of Dove’s poems, Testimonial.  The poem was chosen by both Dove and Guinn, because of the positive message that may inspire and relate to UVa students and the Charlottesville community at large.

“In the mural design I wanted to express the emotion of Rita Dove’s Poem “Testimonial”, with its beautiful exuberance and optimism, its enthusiasm for, and wonder at life. In this spirit I tried to create a space for the viewer’s mind to enter and connect with those emotions.

The abstract, elemental shapes and sweeping brushstrokes of the design reflect the opening lines of the poem, “Back when the earth was new and heaven just a whisper” I wanted to connect with a time before objects and identities. The motion of the design carries the viewer into the distance in the upper right, implying the line “Back when everything was still to come”. In general to the intensity of emotion in the poem connected me to the rich and bright colors of a sunrise.

Rita remarked in our conversation that the line “The world called, and I answered” would be a good line to excerpt from the poem because it stands alone, rather than being part of a couplet. The full text of the poem would be printed or hand-painted at ground level on the section of wall that wraps around to the front facade of the hotel.

I considered the architecture of the hotel in the design. The prominent horizontal line, that one might call a horizon in the design, falls at the bottom of the 6th floor windows and carries that natural line in the architecture across the mural design. Blacks and grays in the lower section of the mural pick up the black of the train bridge that is seen in front of the mural when viewed at a distance.”   – David Guinn 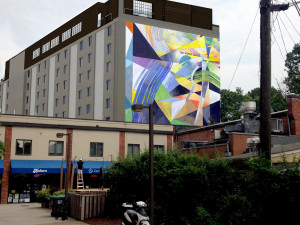 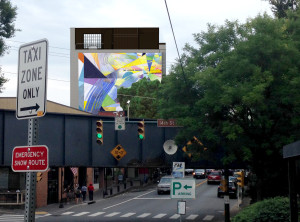 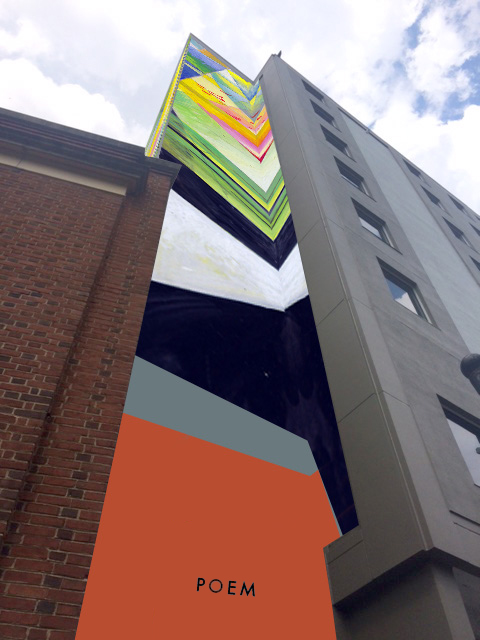 Back when the earth was new
and heaven just a whisper,
back when the names of things
hadn’t had time to stick;

back when the smallest breezes
melted summer into autumn,
when all the poplars quivered
sweetly in rank and file . . .

the world called, and I answered.
Each glance ignited to a gaze.
I caught my breath and called that life,
swooned between spoonfuls of lemon sorbet.

I was pirouette and flourish,
I was filigree and flame.
How could I count my blessings
when I didn’t know their names?

Back when everything was still to come,
luck leaked out everywhere.
I gave my promise to the world,
and the world followed me here.

Taking into consideration the public art guidelines, we kept a portion of the original wall color along the left side of the wall.  Therefore, the mural will be “framed” by un-touched, or original aspects of the architecture on all three sides of the design.

Additionally, due to the unique elevation of the main wall, (the bottom of it starts three stories up) we wanted to connect the mural to the sidewalk so pedestrians and motorists could both see color and have a vantage point to read the poem in its entirety.  By wrapping the mural around to the front facade, we were able to bring the mural to the sidewalk and allow for a place for the mural to be painted and read in an adequate size.  The graphic aspect of how the poem will be displayed on the wall is still being worked-out by the artist.  Furthermore, there will be a plaque at the street-elevation showing a full visual of the west-facing mural design, a description of the project, and a list of our ongoing and awesome sponsors!

The mural artist will be primarily working from a swing stage, suspended from the top floor of the hotel.

Thanks to our sponsors at Benjamin Moore and Blue Ridge Paint and Decorating, we will be using Benjamin Moore’s Aura line, the highest-quality paint available to the exterior market.  This will ensure at least 25-30 years of fantastic duration and color-hold.  The mural should remain in great shape for as much as 40+ years.